It is a dirty war of vigilante justice, rag-tag militias and indiscriminate bombing of civilians. This stunning and intimate film gets right into the stark reality of the frontline battle for Syria.

In a shot-out car a dead man lies across his wife in a hopeless attempt to save her. The rebels, led here by Abu Muhammad, a former army colonel, thought they had cleared the snipers from this area. But they were wrong. His men are immensely brave and committed, but also undisciplined: “The problem is they don’t follow directions. If they follow 15% of the plan that’s great!” With the government unwilling to engage in direct conflict with the rebels, for fear that those in the lower ranks will defect, snipers have become key to their strategy and leave a trail of dead bodies, young and old, in their wake.

However, it’s not just the government who are guilty of excesses. When the rebels capture a civilian trying to sell information to the army, they torture him for two hours, despite Abu Muhammad’s assertion he will get a fair trial after the conflict. But Abu Muhammad has greater worries. His group are low on ammunition and believe they can only win through “casualties and a willingness to die”.

Their current “marriage of convenience” with Islamic fundamentalists also worries him. What will they do if they hijack the revolution? “The real battle for Syria begins after victory. We will fight anyone who tries to turn our country into an extreme Islamic state.” 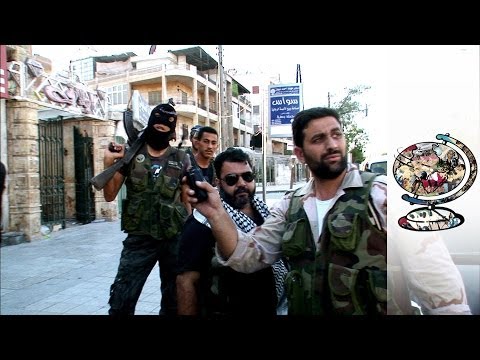 At a total cost of more than 3.1 million lives, the Vietnam conflict is, to date, America s longest and most controversial war. It also...

This documentary takes us deep behind the lines of the Vietnam War to follow thirteen American soldiers and their stories firsthand.

Tackling the subject of the second Gulf war the documentary Mission Accomplished was filmed on the battlegrounds of Iraq. The film takes a critical look...

A film that goes deep inside this secret world that is changing the face of modern warfare, with the private military industry booming in Iraq

It's the biggest leak of information in history. The controversial Wikileaks website released over 400,000 secret US files revealing key aspects of the war in...

This conflict shaped the world that came after to this day. It was the catalyst for the rise of soviet communism in Russia, whose unraveling...

The atrocities of Nazi Germany's concentration camps of the Final Solution are documented in this documentary film.

A film telling the story of Private James Dresnok who defected to communist North Korea during the Cold War.

In this award-winning documentary film about the Israeli-Palestinian conflict, we go on a journey from West Bank to Gaza and eventually settling in Rafah where...