African Cats is like a real-life version of the Lion King. The documentary examines the lives of two lion prides and a determined cheetah single mom, and how their lives intertwine on the Serengeti. Warmly narrated by Samuel L. Jackson, who bestows just enough identifiable emotions onto the film’s subjects to be extra engaging.

But the stars of African Cats are the cats themselves – with amazing photography of them in action. Documentary directors Alastair Fothergill and Keith Scholey have featured incredible camera techniques that allow close-ups of a tiny fly, say, landing on a lion’s whiskers. There’s also a lot of slow-motion photography that shows the amazing muscles in a lion’s shoulders or a cheetah’s paws when the cats are on the hunt.

African Cats focuses on the pride of lions overseen by Fang, a male with a snaggletooth injured in a fight, and the lionesses and cubs who make up his family. It also focuses on Sita, an agile young female cheetah, and her litter of adorable cubs, who play and purr just like domesticated kittens.

African Cats doesn’t shy away from the law of the jungle, showing successful hunts and the dangers that the animal families must face daily. But despite the very real perils of the wild, most of the cast of critter characters are healthy and safe for the duration of the film. 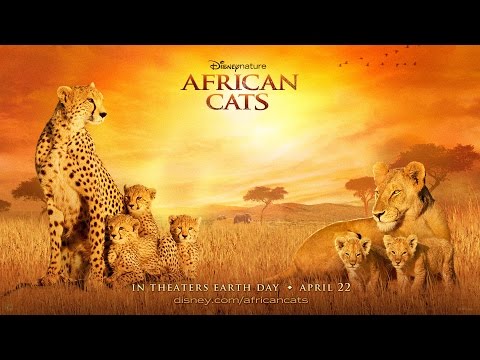 In this three-part documentary series VICE heads to the Amazon on a hunt for its most hallucinogenic tree frogs. The Sapo's venom produces an effect...

The story of Chito the Crocodile Man who feeds, swims and plays with Pocho, a giant American crocodile.

This mesmerizing film explores the life and death of amateur grizzly bear expert and wildlife preservationist Timothy Treadwell, who lived unarmed among grizzlies for 13...

A film that reveals to the world the shocking and deadly ritual that involves the mass slaughter of thousands of bottlenose dolphins each year on...

Tom Varney is a former psychotic criminal who later found God and devoted himself to serving his fellow man. In a strange twist of morality,...

In Freezing temperatures, icy winds and starving, penguins start their journey to find the perfect mate to start a family.

Shot over twelve months, Polar Bears: A Summer Odyssey is a blue chip wildlife documentary that tells the story of a young polar bear's epic...

Beautifully captured footage of human life, religion, and places around the world in this non-narrative documentary by Ron Fricke

This film teaches us that possessing good dogmanship will help us make our dog's life happier.