In 2011, three plain-clothes NYC police officers stopped a Harlem teenager, two of the officers questioned and frisked him while the third remained in their unmarked car. The teenager secretly captured the interaction on his mobile phone, and the resulting audio is one of the only known recordings of stop-and-frisk in action.

During the course of this recording, the police officers give no legal reason for stopping Alvin, and during the stop the police were aggressive, using unnecessary language and threatened Alvin with violence. Early in the stop and frisk, one of the officers asks, “You want me to smack you?” When Alvin questions the officer as to why he is being threatened with arrest, the other officer responds, “For being a fucking mutt.”

Later in the stop, while police hold Alvin’s arm behind his back, the first police officer says, “Dude, I’m gonna break your fuckin’ arm, then I’m gonna punch you in the fuckin’ face.”

This video contains exclusive audio of the stop and frisk that was carried out by the New York police officers, revealing the discriminatory and unprofessional way in which this controversial policy is being implemented by police on the city’s streets. 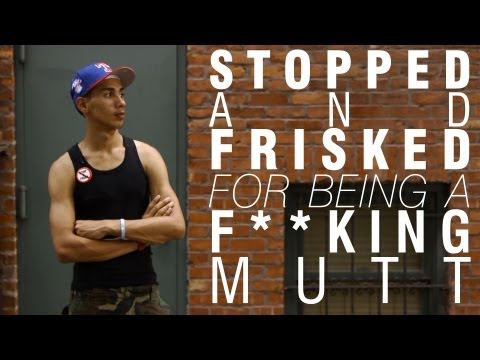 A Texas prison prepare for another execution of a young black man. Four leather belts will strap him to a white bed as he waits...

This film a devastating investigation into the Catholic Church's pedophilia scandals, the film begins by looking into one priest, Father Oliver O'Grady, who agreed to...

Cocaine Cowboys takes us back to 1980s Miami, a time when endless quantities of dope were smuggled into the city, and the bodies were piling...

Albinism is a non-contagious, genetically inherited disorder, affecting about 1 in 20,000 men and women around the world, regardless of ethnicity and geographical location.

Jeffrey Dahmer was not a typical serial killer. He did not come from an abusive, impoverished, or violent background. On the contrary, his father was...

The American prison system has more inmates than any other country in the world, spending billions per year to keep over two million prisoners behind bars.

Charles Manson is an American serial killer and an icon of evil, who led the cult known as the Manson Family. He was found guilty...

Eighty percent of us have stolen something at least once in our lives. One out of ten of us shoplifts on a regular basis. This...

Zara Whittaker knew she was smuggling drugs but she didn’t know she was carrying a baby too. She never thought anything could go wrong, her...

In this film, Chris tells his side of the story of how he ended up being banged up abroad in Bali, before finally being released...

A true account that reveals the story behind drug kingpin Freeway Rick Ross's empire and how the CIA helped him feed America's appetite for crack...