In the summer of 1989 a new type of youth culture was born, they danced at acid fuelled rave parties, in fields and empty warehouses, and their symbol, a smiley face. Dubbed the Second Summer of Love – all the ravers wanted was the freedom to party.

The rave scene, along with the drug ecstasy and ice pops, broke down social barriers and even the football hooligans were “loved up”, a problem that the government were never able to control. But their dream quickly soured as the gangster element moved in at the end of the summer.

The pop charts, once dominated by Jason, Kylie and Sonia, gave way to fused dance beats of the era with a psychedelic, 1960s flavour. Mrs Thatcher’s grip on power was also weakening, with a radical cabinet reshuffle and her increasingly regal demeanour revealing the cracks that would eventually remove her from office a year later. And in a euphoric, blazing hot summer, the Marchioness disaster was a moment of horror that people would never forget. 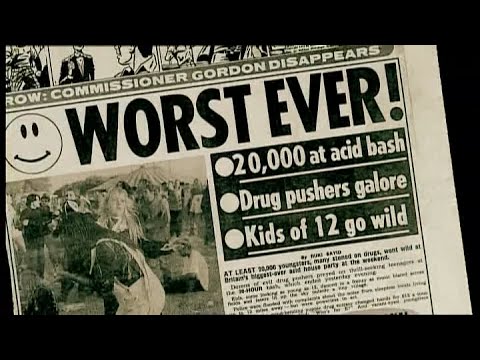 After more than 30-years locked up in storage, this film brings us never-before-seen footage of Black Power. The Black Power Mixtape presents key figures and...

Fought over two centuries, the epic conflict between the Christian Crusaders and the Muslims decided the fate of the Holy Land of the Middle East....

The Great Smog of '52 blanketed London and seemed to be quite normal at first. But over the next two days, a period of cold...

The Terracotta Warriors are a household name to millions around the world. But how did the ancient craftsmen create something never done before.

Tony Robinson goes in search of Britain's Real Monarch. The result is a detective story that takes him from the Tower of London, via Debretts...

June 24th, 1945, the Soviet Union celebrates victory over Nazi Germany. A victory that cost the lives of near 27 million Soviet men, women and...

The story of how Homo sapiens once shared the Earth with other species of hominid, and how, against all the odds, we survived.

Auschwitz was the site of the largest mass murder the world has ever seen. This documentary charts the evolution of the camp and the mentality...

A short doc from 1946 that reviews the history of immigration to the United States up to the restrictive law passed in 1924.