Albinism is a non-contagious, genetically inherited disorder, affecting about 1 in 20,000 men and women around the world, regardless of ethnicity and geographical location.

Sufferers are afflicted by a congenital absence of melanin, a pigmentation defect in the hair, skin and eyes that causes vulnerability to sun exposure and bright light. Many have very poor vision as a consequence and in tropical countries especially they can be vulnerable to skin cancers if unprotected from the sun.

What albinism is absolutely not, is an indication that the afflicted person is any way invested with magical powers.

Though it might seem absurdly obvious, the point is worth stating so starkly because in parts of sub-Saharan Africa especially, albinos have traditionally faced discrimination and prejudice – innocent victims of a still widespread belief that the condition is in some way associated with the supernatural.

To some, a white-skinned African person is seen as a kind of phantom or ghost, who rather than die will dissolve or disappear with the wind and rain. As a result, in some communities, albinos have been feared, shunned and socially marginalised.

Over the last five years in Tanzania, however, the situation has become much, much worse, with albinos increasingly subjected to murder and mutilation because of a completely spurious myth that albino body parts are effective in witchcraft rituals. Despite international outrage and repeated attempts by the Tanzanian government to stamp out this truly appalling practice, since it first came to light many albinos have been hunted down and attacked purely for their limbs and organs. 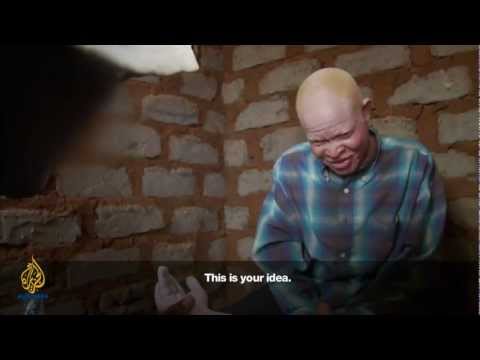 In 2004, 16 year-old Cyntoia Brown was arrested for the murder of 43 year-old Johnny Allen. The documentary follows Brown from the first week of...

Oscar Pistorius was on top of the world, breaking world records, winning gold in the London 2012 Paralympics, and becoming the first leg amputee to...

Tania Head was one of only 19 people at or above the point of impact to survive the 9/11 attacks. She became President of the...

Charles Manson is an American serial killer and an icon of evil, who led the cult known as the Manson Family. He was found guilty...

A sensational North Carolina murder case from the crime to the verdict. When Kathleen Peterson was found dead in her Durham, NC mansion in December...

Imagine being in a prison where over 200 of the prisoners are training in Muay Thai in hope to have the opportunity to fight for...

Two weeks after the 7/7 bombings, police raced to thwart another terrorist attempt in the capital. On 21 July 2005 the country was still grieving...

Ten years ago Shaun Smith was an enforcer for one of the biggest crime families in Liverpool and embroiled in a war against a rival...